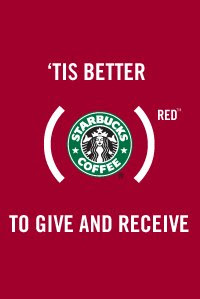 Starbucks appears to have hit it right with Millennials with its RED Event for World Aids Day. So far, nearly 580,198, people have RSVP’ed on Facebook. Whether all of them actually come and sip a ‘handcrafted beverage’ (and generate a 5 cent donation to Project Red), is irrelevant. Starbucks is already a winner just by getting that many people to raise their hand in support of the effort. At minimum, those handraisers will think twice before buying a latte someplace else on Monday. The event is only the beginning. For the next few months, all holiday drinks will also result in a 5 cent donation. There’s a Red Community site where customers can use an ‘impact calculator’ to see how their donations are impacting the world crisis.

If Monday’s event results in lines at Starbucks stores, it will owe its success to doing its its homework on Millennials. The Project Red promotion hits a number of Millennial hot buttons:

2. Easy to do – doesn’t require any extra effort.

4. Multi-media – everything from TV to celebrities in Times Square.

5. Lots of ways to participate online and in person — even a photo op in the store.

While RED is a promotion, it feels bigger, more like a party. That’s what makes its appearance on Facebook more permissible than most commercial attempts on Facebook, and consequently something Millennials click on rather than ignore. A lot has been written lately about Facebook’s struggles to become a viable advertising medium. Perhaps Starbucks has just given us all a clue as to how to leverage its potential.