When it comes to millennial parent households, they are a lot more Modern Family and a lot less Leave It To Beaver. Mothers have a multitude of duties aside from household tasks and childcare, and fathers are no longer responsible for being the sole breadwinner and making it home on time for dinner.

That’s right, today’s dads do a lot for their families outside of the traditional role society has cast for them – and they take quite the offense when it’s made to appear otherwise.

“Dads are parents, not babysitters or bumbling idiots,” Patrick, a 33-year-old father from Virginia, told Crowdtap.

In fact, 26 percent of millennial dads claim to be the primary caregiver in their household and the majority are taking on full or partial responsibility for their children’s day-to-day needs, including bedtime routines (77 percent), bath time routines (65 percent), doctor’s appointments (61 percent), morning routines (60 percent), activities and lessons (55 percent), and pick-ups or drop-offs to and from childcare or school (45 percent) – numbers completely unheard of in generations past.

If brands targeting millennial parents are to be successful, it will be vital for marketers to recognize that millennial men who have taken on the role of dad for the first time are redefining exactly what fatherhood means, subsequently changing the way that such brands should speak to young fathers. 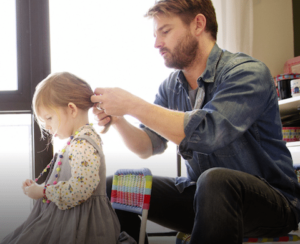 “Dads are parents, not babysitters or bumbling idiots,” Patrick, a 33-year-old father from Virginia, told Crowdtap.

Get to know the Dad of today

We initially discussed the importance of this shift in our book, Millennials With Kids: Marketing to This Powerful and Surprisingly Different Generation of Parents. Although moms still have the greatest amount of spending power overall when it comes to family purchases, millennial dads have a very impactful sway on the final decisions made regarding household and child purchases, leading to a partnership method of parenting instead of stereotypically divided roles.

This makes sense considering millennial dads are serving as stay-at-home parents more often (21 percent according to YPulse); actively seeking out recommendations, opinions and ideas from their friends in various social networks (93 percent find social networks somewhat to extremely helpful for parenting); and fully embracing their shift to fatherhood (the top five aspirations for dads after having a baby include child’s well-being, raising healthy children, time with family, a successful marriage or relationship, and a healthy lifestyle, compared to hobbies, time with friends, career, romance, and fitness before baby).

You can understand their ensuing disappointment when faced with advertisements and brand communication that doesn’t reflect their role and dedication to parenthood, but rather frames them as unengaged or second to mothers. YPulse reports that 52 percent of millennial parents feel that the current ads they see are made for mothers more than fathers, and it wasn’t until the 2015 Super Bowl that viewers even claimed to remember an advertisement where a dad wasn’t portrayed as clueless.

The lesson for brands to learn? Get to know millennial dads for who they actually are and depict them accurately.

The 2014 Dad 2.0 Summit found that marketing to parents should be inclusive, and that women want their husbands or significant others represented properly and rank a brand higher if the ad shows an engaged father. 2016 YPulse data further supports this, reporting that 83 percent of millennial parents think advertising should appeal to both mothers and fathers equally.

Brands getting it right

Two brands that stand out for their successful portrayal of today’s dads are Gillette and Cheerios.

Gillette’s “Go Ask Dad” campaign shows a group of dads from all over the world wondering why their sons would rather get life advice from the Internet than from them. Gillette asks the sons to Google questions like “how to tie a tie” and “how to shave.” The brand then sends the fathers in to give their advice and assistance, which leads to a bonding moment between the two as the son admits that dad’s advice is much better than what was found on the Internet.

Cheerios’ “#HowToDad” campaign stood out for relating to the “real life” activities dads go through and accomplish daily, rather than framing up a product that would make them envied by the whole neighborhood (looking at you, auto industry). The brand’s television spot simply showed a dad’s balancing act as he went throughout his morning attempting to get his kids and wife ready for their day, but because it was so different and highly relatable, it stood out to parents.

Unfortunately, neither of these advertisements directly relate to the Back-to-School season. We have yet to see an ad that capitalizes on the buying power and household influence that millennial dads hold. Brands that produce messages that ensure an honest depiction of these dads in the Back-to-School space will gain ground with both sides of the millennial parent team and effectively secure the attention of all involved in the consumer journey.