Every generation has a defining cause that serves as the foundation for its behavior in the market. For Boomers, it was anti-establishment. For Millennials, it was the environment. For Gen Z, it is equality.

Our recent Gen Z study found that the top three defining issues this generation rallies behind are racial equality, gender equality and sexual-orientation equality. These issues strongly correlate to Gen Z’s view on identity and acceptance, as teens have grown up in a time where they have had distinct visibility into the discourse surrounding human rights. Additionally, the “minority majority” has come to fruition with this group, as teens today are more likely to sit in classrooms that are nearly half non-white and have friend groups that consist of a variety of ethnic and cultural backgrounds.

As a result, Gen Z is becoming much more involved in social activism at an earlier stage in life compared to previous generations. They are demanding transparency, fair representation and understanding not just for their own cohorts, but for all. The time of discrimination and stereotypes has passed, and only the brands who recognize this and join forces to support Gen Z’s ideals will win with this consumer group. 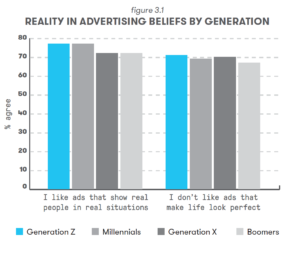 Even when so many other teen brands have failed, American Eagle (AE) continues to find success. It consciously made a decision to embrace individuality and forego the commercialism of gendered stereotypes and logos plastered across products long before its competitors, choosing to feature a cast of diverse young adult models from a variety of ethnic backgrounds. In addition to their cultural differences, these models also vary in size and shape, wearing the brand apparel in their own distinct way.

Most recently this can be seen in the brand’s  “We All Can, Can You?” campaign, which promotes individualism, diversity and teens’ interest in being self-expressive. Visuals of the campaign feature statements such as “I can love anyone,” “I can be heard,” “I can create my future,” and “I can fear nothing.” Additionally, the campaign features the most popular influencers of Gen Z today, including Hailee Steinfeld, Valentina Cytrynowicz and Xiao Wen Ju.

“[Gen Z] are not judgmental, they don’t put people in boxes, and they don’t seem to care as much about what you do, who you love, or what you look like,” said AE CMO Kyle Andrew in an interview with Fast Company. “Generation Z seems to really care about engaging with brands that have values that align with their own.”

His advice for brands?

“You can’t just make stuff: You have to stand for something.”

While Nike is not a brand segmented to one generation of consumers, it strongly appeals to Gen Z due to its dedication to a purpose that is much deeper than just selling gear. In fact, Nike built its brand on this purpose: Everyone is an athlete. As a result, it established an authority that extends beyond the production of shoes and fitness apparel and into the lives of those who interact with the brand. On a deeply humanistic level, Nike connects with its consumers and identifies with them based on who they are as individuals.

For instance, the brand’s “Unlimited” campaign that debuted in 2016 championed the stories of athletes including Chris Mosier, the first transgender athlete on a U.S. National Team; Kyle Maynard, the first quadruple amputee to climb Mount Kilimanjaro; and Sister Madonna Buder, an 86-year-old Catholic nun and triathlete. The ads focused in on each athlete and their own unique strengths and attributes, using slogans to highlight them: Unlimited Will, Unlimited Courage, Unlimited Fight, Unlimited Pursuit, etc.

In addition to promoting diversity in its advertising and marketing, Nike has also done so through its business model. In an act of transparency, the brand released data on its internal structure last year, allowing the world to see that the majority of its employees are members of minorities and that women make up 48 percent of its entire global workforce. This solidified Nike as a brand that both talks the talk and walks the walk.

Popular among Millennials for its affordable yet stylish apparel, H&M has also found a way to resonate with Gen Z through its decision to celebrate the independence and free-will of women in its latest campaign, “She’s A Lady.” Redefining the traditional standards of “ladylike,” the ads feature a cast of different sizes, shapes, ethnicities and cultural backgrounds who have varying personal interests and takes on style. Throughout, a remake by Lion Babe of Tom Jones’s hit song of the same name plays in the background, one that takes on a whole new meaning for feminism than the original.

An H&M spokesperson explained, “The latest campaign celebrates diversity as well as inspirational women from various backgrounds, encouraging women around the world to embrace their personal style and take pride in who they truly are and what they stand for.”

As a result of this stance, the brand has received praise online and more than 57 million hits on YouTube.

But it isn’t just one campaign that has exhibited H&M’s strong feelings on social equality. In 2016, the brand made waves for featuring Mariah Idrissi, a Muslim of Pakistani and Moroccan heritage, in her hijab and a pair of the brand’s sunglasses. The video she was featured in, “Close the Loop,” also featured other cast members of various nationalities, genders and sizes.

Idrissi had nothing but positive thoughts to share on the effort, sharing with CNN in an interview:

“They actually really knew exactly how I should be dressed. They understood it had to be very loose fitting, not figure hugging, not anything revealing. They gave a range of different outfits…all of them were respectable.”

Next Steps for Brands

Just like American Eagle, Nike and H&M, brands must understand the defining issues that Gen Z stands behind if they hope to connect with this generation. In the same way that environmentalism empowered the Millennials, social equality will define and fuel the motivations of teens today. In this same vein, corporate social responsibility must expand from reducing a carbon footprint to implementing a business model that is authentically built on equality, inclusion and acceptance for all.