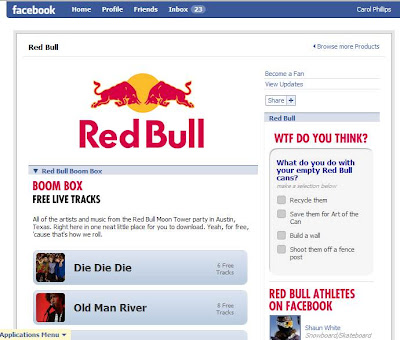 While there are many contenders, Red Bull may be the ultimate Millennial brand. As Millennials became increasingly sleep deprived, energy drinks thrived. Thirty-four percent of all 12-24 year olds say they ‘regularly drink energy drinks’ (Mintel). The reason given most often for drinking is ‘for energy’ and ‘to stay awake’, far out-pacing the number who say they mix it with alcohol.The energy drink category has more than quadrupled to $5 Billion in 2008 (est), up from $1 Billion. There can be no doubt that it is immensely profitable, at $2.27/16 oz vs. $.53 for sports drinks and $.36 for soft drinks.

Energy drinks are a Millennial-driven phenomenon, and with a 42% share, Red Bull is the driver. 61% of 18-24 year old energy drink users drink Red Bull, outpacing Monster Energy by a factor of 2:1.

Since its beginnings, Red Bull has shown that it ‘gets’ Millennials and especially their desire for a dialog with the brands they consume. This blurring of the social with channels of brand marketing is what NYT columnist,Rob Walker , dubbed ‘murketing’ in his great book, “Buying In: The Secret Dialog between What We Buy and Who We Are”. He maintains that modern branding involves complicity between consumer and consumed, an embracing of commerical culture, not commercials. Red Bull was among the first to recognize and leverage “murketing”, with its extreme sports competitions in extreme locations. Red Bull is also a great example of why Millennial-targeted brands should forgo making claims in favor of building affinity. Who knows or cares what guanine is, anyway? Certainly not my students.

Red Bull’s Facebook group shows how effectively they have leveraged murketing online. The group boasts 282,286 fans. There is free music, a contest to find the next great hip hop artist, a webisode series, photos from events, profiles of Red Bull athletes, links to other great ‘procrastination’ sites, and many more ways to connect with Red Bull web sites. Perhaps the most unique feature is Red Bull’s sharing of drunken phone messages they have received. Here is one of the top rated (yes, you can rate and share them): “Hi, I really like Red Bull a lot. Right now I’m pooping. In my parents bathroom. And I really like Red Bull a lot.” Try that Monster Energy. While much of the same content can be found on Red Bull’s web site, it doesn’t have the same energy as when presented in social media. Count me in as a fan.