Class of 2009: An Unscientific Profile 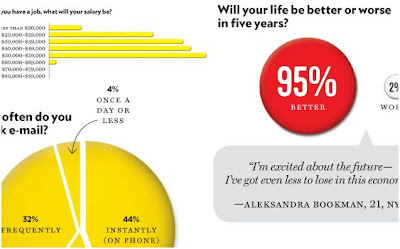 Journalism met ethnographic market research this week in an article in New York magazine, “Class of 2009“. In four short, highly graphic pages, the article reports the findings of a survey of 200 college students and young adults.

The sample, while unabashedly unscientific, represents a range of New York schools, including NYU, Brooklyn College, the NYPD Police Academy, Wharton, Yale, and even Friends Seminary. The survey questions show a lot of imagination (‘what does ‘hooking up’ mean to you?‘, ‘what do your parents not understand about you?’). The result is a provocative portrait of Gen Y circa 2009.

The main finding according to the author, Emily Nussbaum, confirms that Gen Y exhibits a surprising degree of optimism. Most of those surveyed think the recession will not last more than two years, and 91% expect to be better off in five years — even though only 58% have a job lined up post graduation.

“Nonetheless, the results of this imperfect survey were revealing. We were startled by the fact that, circumstances be damned, we found very little bitterness at all—caution, yes; worry too—but judging from the responses to our questions, this is a reflexively optimistic cadre of graduates, feeling, if anything, existentially freed up by this era of radical change. They’re nervous about the job market but figure it’ll sort itself out. They describe their parents with shocking regularity as their “best friends.” They’ve lived online for so long it’s a default setting, one they believe lends them a more global-minded perspective than that of their elders. Their tone overall was more bemused than outraged: “I’m a mixture of excited and nervous for the future,” says Forrest Petterson, a graduating senior at Friends Seminary. “But there’s no point in getting upset, because it’s not the end of the world.””

49% say they are less frugal than their parents

52% ‘often’ discuss money with their parents

48% ‘often’ discuss politics with their parents