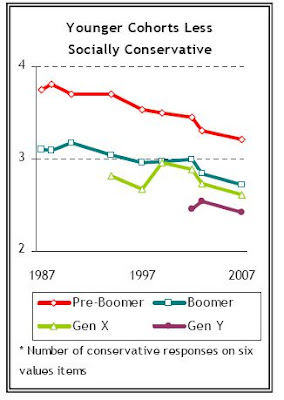 There is more to this chart than meets the eye.

It is the result of a remarkable 20-year study of values by the Pew Research Center.(download entire pdf here). The latest wave of the study was conducted in April/May of 2009. This chart reveals two important findings: a decline in ‘social conservatism’ among specific age cohorts over time and progressively lower levels of social conservatism among each younger age cohort.

Here’s how the report summarizes this chart:

What that means is that Gen Y is distinct in its values from both Gen X and their largely Boomer parents. This finding was widely touted Monday, June 29, in many newspaper and online articles. Here is a sampling:

Yahoo News. “Study finds widening generation gap in America.” From cell phones and texting to religion and manners, younger and older Americans see the world differently, creating the largest generation gap since the tumultuous years of the 1960s and the culture clashes over Vietnam, civil rights and women’s liberation.

MSNBC “Study: Generation gap in U.S. largest since ’60s.” A survey Monday by the Pew Research Center highlights a widening age divide after last November’s election, when 18- to 29-year-olds voted for Democrat Barack Obama by a 2-to-1 ratio.

Sounds serious! Yet, how can these headlines be reconciled with the common wisdom that Millennials get along famously with their Boomer parents? In the past, ‘generation gaps’ led to physical and emotional distance, but not so for this generation and their parents. Somehow, the culture wars appear to be, suddenly, over. They have apparently learned to ‘mind the gap’. While they may not see eye to eye, these generations have no problem with that fact, and it’s not that they are unaware of the differences in outlook; according to the Pew Study, almost eight in 10 people believe there is a major difference in the point of view of younger people and older people today.

The reason also has nothing to do with the nature of the differences or how strongly they are felt. Indeed, most said that the biggest differences concerned issues of morality, religion, and the social values surrounding lifestyle, family, relationships and dating — hardly minor issues. Older people also cited differences in a sense of entitlement. Those in the middle-age groups also often pointed to a difference in manners.

Instead, the reason appears to have everything to do with a flourishing of ‘tolerance’, especially among younger people. If there is one value young adults hold above all others, it is tolerance. Apparently, this even goes for their parents.