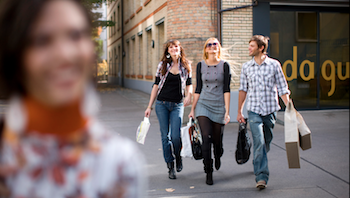 Marketing to the Millennial Man

Marketers who have traditionally considered their target audience to be mainly women need to start thinking about a new demographic: “Millennial Man.” Not a super hero, exactly, but according to a new report, this so-called “millennial man” wields a hefty amount of power.  The eMarketer report shows that young men are increasingly happy to deploy their digital know-how to shopping, often in what might previously have been seen as predominantly female areas like fashion and food, thereby upping their influence in buying decisions.

So, who is “Millennial Man”? Definitions vary, but by their broadest definition, millennials represent the group of consumers from their late teens to their early 30s. According to the report, male millennials currently earn more than, and are happier at work, than their female counterparts. They are hungry for entertainment–usually in a digital form–and a high proportion of them are smartphone users. They like the convenience that digital or mobile shopping offers and they’re increasingly using it as a part of their shopping habit.

The report, by DDB Worldwide, highlights a January 2013 survey of US Internet users, also showed some interesting trends about the increasing influence of male shoppers between the ages of 18 and 34:

What’s most striking is that the survey reveals that millennial men are more looped in to shopping digitally than their female counterparts. This definitely shows a shift in which the decision-makers are when it comes to shopping, and it’s one that should make the guys a juicy target for digital marketers.

This does beg the question though: do we have the tools to target this demographic? Google AdWords and Facebook’s Enhanced Post Targeting both offer targeting by gender and, last year, Twitter began to offer gender targeting for promoted tweets.

The jury is still out though on how effectively these features are. For instance, Twitter claims that they are “able to understand gender by taking public signals users offer on Twitter, such as user profile names or the accounts she or he follows.” This is a bit vague, but hopefully these developments signal a move towards new features across the social media spectrum, which will be welcomed by brand marketers.

What’s your take on the rise of the ‘millennial man’ and the subject of gender targeting in general? We’re always interested in hearing your feedback.

Shelly Kramer is the Founder and CEO of V3 Integrated Marketing. A 20+ year marketing veteran, she’s a brand strategist focused on delivering integrated marketing solutions and leveraging the web and inbound marketing to drive leads and sales. Forbes has recognized her blog as one of the Top 20 Best Marketing and Social Media Blogs. Find her on LinkedIn, Google+ or Twitter.