When price points are similar, brands are facing extreme difficulty when it comes to standing out.

But just as with the Millennial Generation before them, there is one key way that brands can resonate with the up-and-coming “Pivotal Generation” – as we’re calling Gen Z. That’s by offering proof of purpose. 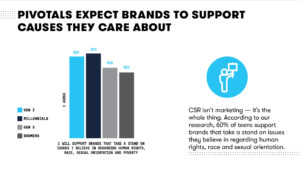 They don’t view ethics as having any gray area; to them, things are black and white with no middle ground. This stance is likely due to the fact that these teens were born into a true post-digital era that offered them the ability to see every side of an issue thanks to social media. And rather than shielding themselves from the controversy that often results, they willingly take a stand and respect the right of others to express their opinions. This is a perfect example of their traditional values and non-conformist expectations coming to a head.

This means brands can no longer hide behind red tape or closed doors while pretending to stand for something they have no knowledge of or the brand authority to talk about. Pivotals will automatically take note of the phonies and ensure that they are never supported by their dollars or the dollars of those in their peer networks…or their parents.

On the other hand, they will reward the brands that offer full transparency and authenticity.

Ben & Jerry’s is one great example. The brand has always been popular among younger generations for its delicious and creatively-named ice creams, but another major aspect of the brand is its commitment to social issues and linked prosperity for everyone that is connected to its business: employees, farmers, customers, neighbors, etc. It frequently flexes its brand authority in this space on its website and social media platforms regarding topics such as democracy, climate justice, LGBTQ rights and fair trade. Most recently, the brand took a public stand with the Black Lives Matter movement (a social issue extremely important to Gen Z). In addition to the well-written piece published to its website and linked to social, Ben & Jerry’s also released a new line of flavors to get the greatest amount of earned coverage for the cause. It was clear that the brand understood the entirety of the issue and acted accordingly as aligned with its purpose. This was noticed and appreciated by Pivotals.

Prove it or lose it

By contrast, the Pivotal Generation will punish brands that don’t exhibit the same behaviors. They will not think twice about instantaneously removing a brand from their roster over even one wrong move that doesn’t align with their beliefs and standards when it comes to societal issues. For example, they immediately dismissed Chick-Fil-A because of its statement supporting traditional marriage rather than same-sex marriage. Just as quickly, they rallied to Starbucks when it took a clear stance in favor of same-sex marriage and consistently proved it through action.

All of this shows that the most important requirement for Gen Z when it comes to brands is that brands prove their commitments to their genuine purpose. And no, proof isn’t just offering a shout-out on a website or a statement to the press.

At Barkley and FutureCast, we consider proof to be any moment or action where a brand over-invests time and resources on a relevant, useful or, sometimes, entertaining idea that serves to exemplify the brand’s purpose. It’s not usually intended to be advertising but rather a symbol of what the brand stands for. An oft-used example is that of REI. In 2015, REI was one of the first brands to publically announce it was closing its doors on Black Friday to instead #OptOutside. This move was not meant to be an ad but it received significant media attention and praise from consumers that has followed the brand to this day.

This type of actionable proof will be an absolute expectation across industries as Gen Z continues to gain influence throughout the market.

In order to connect with a generation that practices what it preaches, brands will have to make a commitment. The brands that do will stand out in a crowded market and experience growth where it matters most.